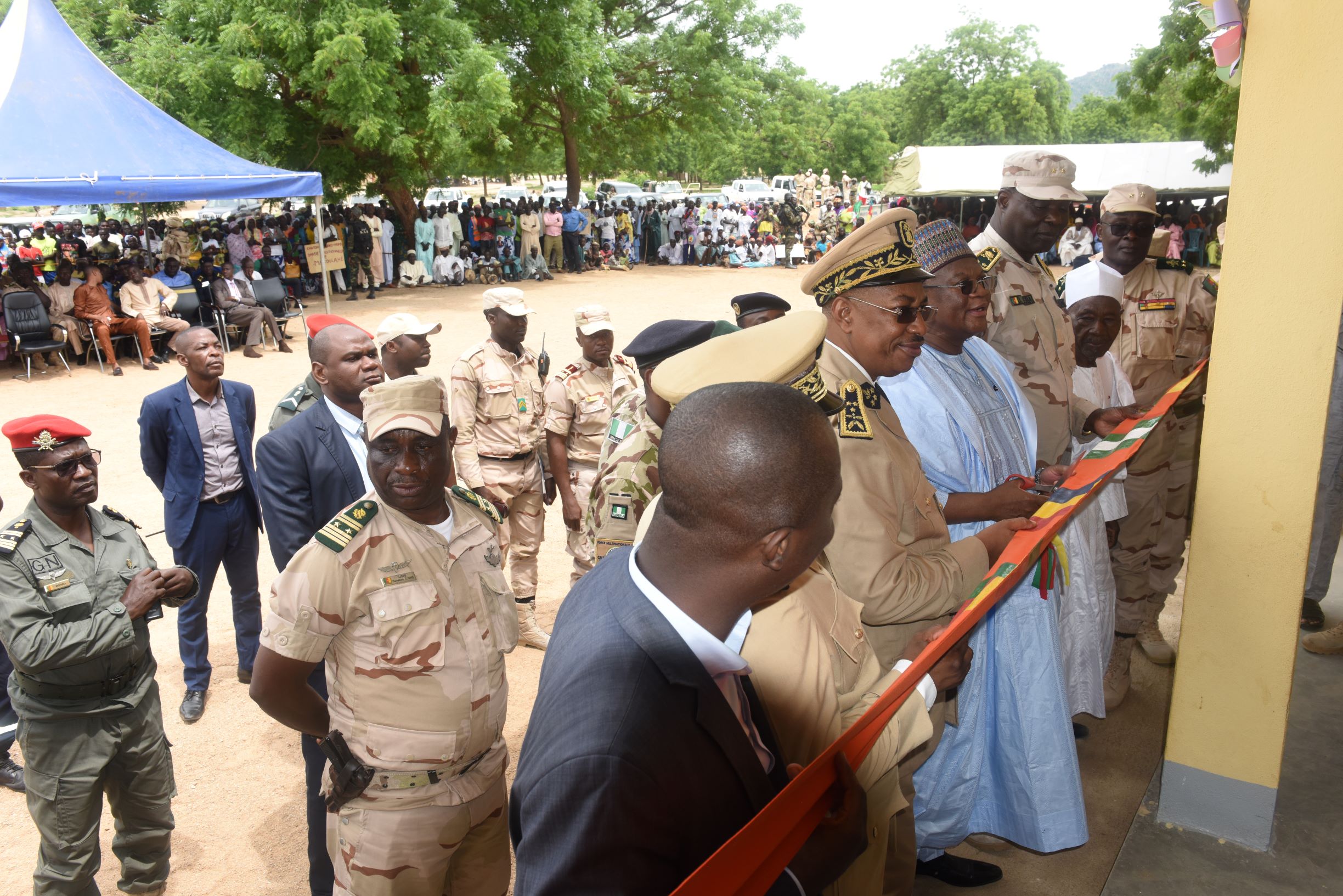 On 20 August 2019, the Vocational Nursery School of the Mora military camp was packed with people for the official handover ceremony of a block of two classrooms. 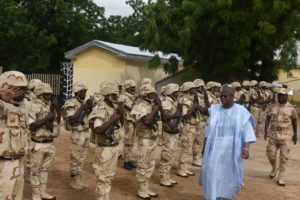 In attendance: Ambassador Mamman Nuhu, Executive Secretary of the Lake Chad Basin Commission (LCBC), Head of Mission of the Multinational Joint Task Force (MNJTF), administrative, civilian, military, traditional and religious officials. Also in attendance was the Governor of the Far North Region, the representative of the African Union Commission (AUC), the representative of the Force Commander MNJTF, the Senior Divisional Officer of the Mayo-Sava Division, the Commander of Sector 1 of the MNJTF, the Divisional Officer of Mora, the Mayor of Mora as well as a large crowd composed of civilians, military officers, parents and students.

This brand new block of two classrooms, built on the new site of the school, was carried out by the AUC, for MNJTF, as part of Quick Impact Projects (QIPs).

Quick-impact projects are community-based micro-projects such as the rehabilitation of public services and small infrastructure, training and awareness-raising, employment and income generation, implemented in a timely and sustainable manner, to meet the priority needs of the population while building confidence in the stabilization, reconstruction and resilience process. This was particularly stressed by Brigadier General Bouba Dobekreo, Commander of Sector 1: “These classrooms are intended in particular to support stabilization efforts in the regions affected by Boko Haram. They also address the most pressing needs of the population while strengthening the acceptance of MNJTF units in conflict areas…,” said Brigadier General Bouba. It should be noted that Baga Sola in Chad, Diffa in Niger and Baga in Nigeria, are the other three MNJTF sectors in the four countries affected by the Boko Haram crisis.

“Education is one of the pillars for the prevention of violent extremism, peacebuilding and promoting sustainable development. Unfortunately, the crisis in the Lake Chad Basin has led to the destruction of many school infrastructures, depriving thousands and thousands of young children of schooling for many years. To ensure that no group is left behind in stabilization efforts, more attention should be paid to rebuilding school infrastructure…,” the Executive Secretary LCBC, Head of Mission MNJTF added. “Whatever investments in military and security operations are made, they would be in vain without significant investments in education”. “If you wanted to put an end once and for all to the scourges of poverty and insecurity, we must ensure that all girls and boys in the Basin, wherever they may be, have access to quality basic education, including free and compulsory primary education for all and that all children, including adolescents, have every opportunity to develop their potential in an environment that supports them” Ambassador Mamman Nuhu continued.

Like all the areas in the Lake Chad Basin affected by the Boko Haram crisis, Mora – one of the three councils in the Mayo Sava Division (Far North Region of Cameroon), bordering Nigeria, is not immune to repeated terrorist attacks and the wanton violence caused by Boko Haram, thereby leading to massive population displacements and the arrival of a large number of refugees, with serious ramifications on the economic and social situation, particularly with regard to the education of children. Due to the destruction of many infrastructures (including school infrastructure) and massive population displacements, hundreds of school-age children do not have access to school. Those that do exist have difficulties linked to the inadequacy or even unavailability of teaching and learning materials, exposing this vulnerable group to many risks such as banditry, drug use, recruitment into armed groups, prostitution and early marriage, especially among girls. “While the population has quadrupled, as a result of the displaced and refugees, there is a glaring lack of basic socio-economic infrastructure and few opportunities for training and education and few economic opportunities, especially for young people…,” said El Hadj Abba Boukar, Mayor of Mora.

Created in October 2009, the school has precarious buildings, loaned by a local Good Samaritan. The same building is also home to displaced populations, which makes it difficult to live together. “With the construction of this block of classes, teachers can now exercise their priesthood in favourable conditions and make sure that their students are happy and happy beings in places where it is good to learn…”, stated the Mayo Sava Divisional Delegate for basic education, before listing all the support in school materials and equipment provided by MNJTF for the outreach of education in his area.

“As we say so well in our country: he who says thank you, asks for more! That is why we would be grateful to complete this project with the construction of an enclosure fence, the construction of playgrounds and the provision of teaching materials,” added the school Principal.

A request that did not fall into deaf ears. It should be noted that the Regional Stabilization Strategy for the Areas of the Lake Chad Basin, adopted in August 2018 by the LCBC member countries and endorsed by the AUC, UN system organizations and several other bi- and multilateral partners, provides a whole package of short-, medium- and long-term solutions, to facilitate, in particular, the transition from a phase marked by intense military engagement to addressing, head-on, the root causes of the Boko Haram crisis such as climate change, promoting good governance, transparency and improving people’s political and socio-economic resilience. And education ranks high among the nine pillars of intervention in the Regional Stabilisation Strategy (RSS). In particular, with regard to the reconstruction of destroyed or closed schools, the recruitment and training of teachers, the improvement of the enrolment rate, the completion rate of literacy and other basic skills, etc. It also provides for catch-up programmes for those who have missed school and enrolment in non-state schools subject to the appropriate processes of registration, curriculum approval, teacher certification and quality control. Finally, it intends to complement basic education with targeted vocational training and entrepreneurship initiatives to provide young people with the skills necessary for employment and a better life.

Thus, however symbolic it may be, this ceremony to inaugurate a block of two classes in Mora is part of the process of implementing this the Lake Chad Basin RSS.

Previous Post Cooperation: The People’s Republic of China grants US$100,000 to LCBC
Next Post LCBC Staff drilled on “life-saving techniques”