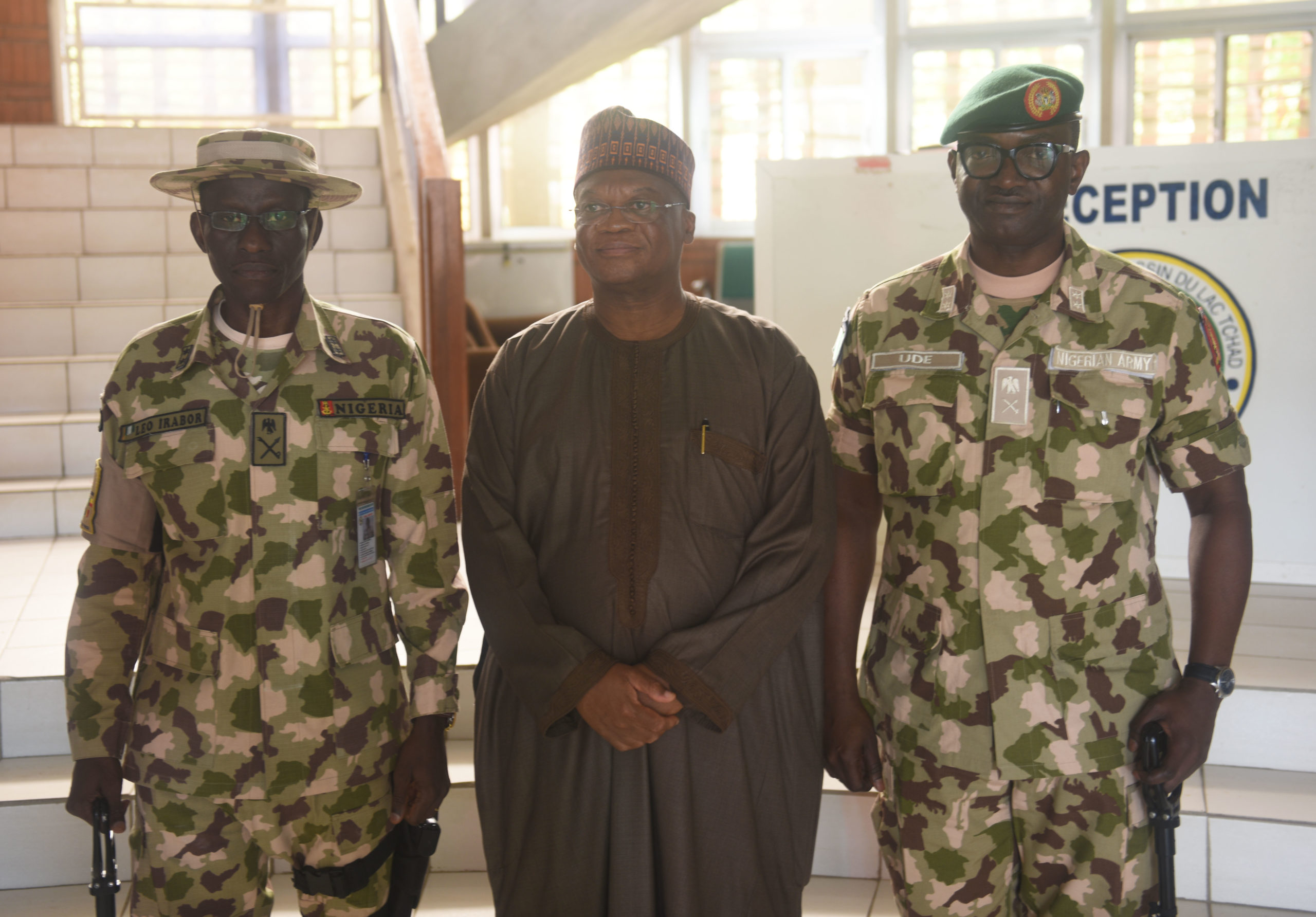 The handing over ceremony of command between the new Multinational Joint Task Force (MNJTF) Force Commander, Major General Chikeze Onyeka Ude and the outgoing Major General Lucky Irabor took place on Thursday, 16 August 2018, at the Headquarters of MNJTF in N’Djamena. Chaired by Ambassador Mamman NUHU, Executive Secretary of LCBC and Head of Mission of MNJTF, this ceremony was graced with the presence of MNJTF senior officers, officers of the Centre for Coordination and Liaison (CCL), civilian and military personalities.

Major General Lucky Irabor, before the handing over formalities per se, took the floor in an emotional speech to thank all his collaborators and partners with whom he had worked during his stay as Force Commander.  He outlined “his passion” with which he had performed his mission for more than a year at the head of this regional institution responsible for the fight against terrorism in the Lake Chad basin. “I leave with a sense of accomplishment, because even if Boko Haram is not defeated, it is significantly weakened… And I have no doubt that my successor, whom I have worked with for more than three decades, will overcome this terrorist group,” Major General Lucky said.

Taking the floor, Ambassador Nuhu, explained how much Major General Lucky Irabor was esteemed by his collaborators and partners of MNJTF. He extolled Major General Irabor’s intrinsic qualities and his operational experience in the Boko Haram war, as demonstrated by the latest “Amni Fakat” operation which significantly reduced BH’s capacities. He congratulated the outgoing Force Commander on his new position, while wishing him success in his new responsibilities. The Head of Mission also assured that MNJTF’s mission is in good hands, particularly with regard to the qualities identified by the Nigerian federal authorities in Major General Onyeka Ude by appointing him at the head of MNJTF. The Executive Secretary outlined qualities like good perception, bravery and dedication, without forgetting his knowledge, expertise and rich culture and above all his respect, professionalism, and dedication in fulfilling responsibilities and duty, while considering MNJTF as a strong supranational citadel in the face of dangers and an example to emulate and transfer to other parts of the continent.

Major General Chikeze Onyeka Ude, aware of the importance of the task and the expectations of member countries, expressed his honour for the trust placed in him by His Excellency the President of the Federal Republic of Nigeria, Muhammadu Buhari, while commending the strides of Major General Irabor during his command and the results achieved in particular in the fight against Boko Haram, thus contributing to the drastic reduction of Boko Haram’s harmful capabilities. He also assured that he will leave no stone unturned to ensure that peace, tranquillity and serenity returns to this part of the basin which is hard hit by this crisis and that he will spare no effort to resolve this conflict which is not only regional, but continental, even global. He requested the participation of the press, because he remains firmly convinced that Boko Haram could not be overcome without the assistance of the press.

The ceremony ended in conviviality and good humour with a coffee break, family photographs and emotional farewells to the outgoing Force Commander.