At the invitation of H.E. Muhammadu Buhari, President of the Federal Republic of Nigerian and Chairman of the Summit of Heads of State and Government of LCBC, the Heads of State and Government met in an Extraordinary Session on 25 May 2021 in Abuja, Federal Republic of Nigeria. In attendance were presidents Faustin-Archange Touadéra of the Central African Republic (CAR), Mohamed Bazoum of the Niger, Al Menfi Ohamed Al-Menfi of the Presidential Council of Libya, the Minister of State, Secretary-General at the Presidency of the Republic of Cameroon, Mr Ferdinand Ngoh Ngoh, representing President Paul Biya and the President of the Military Transition Council of Chad, General Mahamat Idriss Déby.

Also in attendance where Lt. Gen. (Engr.) Ibrahim GABIR, member of the Sovereignty Council of Sudan, the Chairperson of the African Union Commission, Amb. Moussa Faki Mahamat, the representative of the President of the ECOWAS Commission (Economic Community of West African States), the representative of the ECCAS Commission (Economic Community of Central African States) and the Executive Secretary of LCBC and Head of Mission of the Multinational Joint Task Force (MNJTF), Amb. Mamman Nuhu.

The Extraordinary Summit of Heads of State and Government of the LCBC member countries focused exclusively on the situation in Chad following attacks from mercenary groups leading to the demise of Field Marshall Idriss Déby Itno, the late President of Chad, last April.

In a regional context characterised by daunting challenges, including security, health, climate, and economic challenges, the summit reviewed the consequences of this barbaric act for the peace, security, and development of Chad and the Lake Chad Basin and Sahel countries region in general.

According to President Muhammadu Buhari in his opening remarks, “The threats of Chadian rebel groups, who want to overthrow the government, must be taken with all the seriousness it requires. The consequences of a destabilised Chad for the sub-region remain incalculable.” He paid a solemn tribute to the memory of the late Field Marshal Idriss Deby Itno, unrelentless champion of the fight against terrorism and transboundary crime.

“It is our collective duty, and in honour of the memory of men and women who died in pursuit of peace in the region, to stand in unison as leaders of the region to ensure that peace, stability and security are not disrupted in Chad and the region as a whole” added President Buhari. 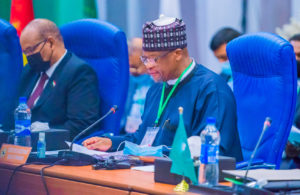 During the closed session, the Executive Secretary presented a background paper on the situation in Chad, which was followed by remarks by the President of the Military Transition Council of Chad. Heads of State and Government took the floor to share, each in their capacity, their concern about the situation arising from the Libyan chaos and the measures aimed at countering the impact of the deteriorating security situation not only in Chad but also in the Lake Chad Basin and the Sahel in general, with the support of the international community.

The Declaration endorsed by participants unambiguously condemned the mercenary attacks against the territorial integrity of a member country, leading to the death of the President of Chad. They expressed their condolences to the Government and People of the Republic of Chad and noted the seriousness of the threats posed by such attacks to the stability of Chad and regional peace, security, and stability. In this regard, they urged regional leaders and development partners to be aware of the need to restore peace and stability in the region, especially in Chad, which is now facing a rebellion in the north and Boko Haram terrorists.

They noted with concern that the situation in Libya is intrinsically linked to the deteriorating security situation characterised by an increased flow of illicit arms and ammunition, narcotics and a refugee crisis that continues to threaten the security of the region. Acknowledged the establishment of the Military Transition Council (MTC) of a 40-member inclusive civilian government led by a Prime Minister, Head of Government from the opposition; of the eighteen-month transition period announced and urged the MTC to engage actively in the process of national reconciliation and dialogue by involving all Chadian stakeholders to hold free and fair elections as soon as possible. The Declaration appealed to all Chadians to avail themselves of the newly created Ministry of National Reconciliation services and prioritise dialogue to settle their differences. They called on the international community to assist the transition process of Chad for the return to constitutional democracy within the eighteen-month stipulated timeframe. Noted the imperative of establishing a Special Fund to support Chad in its ongoing transition and strengthening democratic and governance institutions that would reinforce the social contract and enhance its development.

Commended the efforts of the MNJTF in the fight against terrorism and other transnational crimes in the region and called for more collaboration among troop-contributing countries towards maximising the potentials of the force. They recognised the need to strengthen regional cooperation in the fight against terrorism and increase the support of member states to LCBC and the MNJTF to carry out their tasks properly.

At the end of the deliberations, the Abuja Extraordinary Summit urged donors, international financial institutions, and the international community, in general, to support Chad and provide the necessary financial assistance for a return to constitutional normalcy within the time frame of the transition period.

Previous Story
22 May, 1964 – 22 May 2021: LCBC at 57!
Next Story
Capacity Building Workshop on Gender and Development organised by LCBC – CARE International 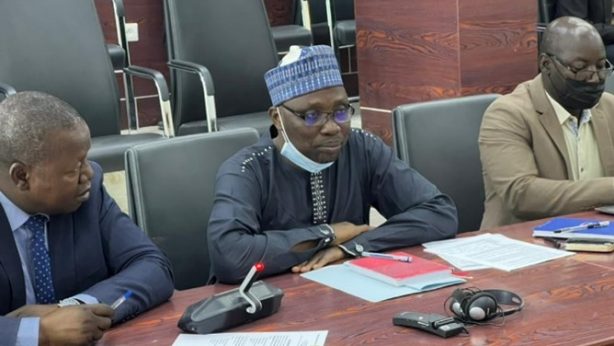